The Mission of the Princeton Public Utilities is to provide our customers with exceptional electric and water services in an efficient and economical manner and to provide our employees a challenging and rewarding work experience. 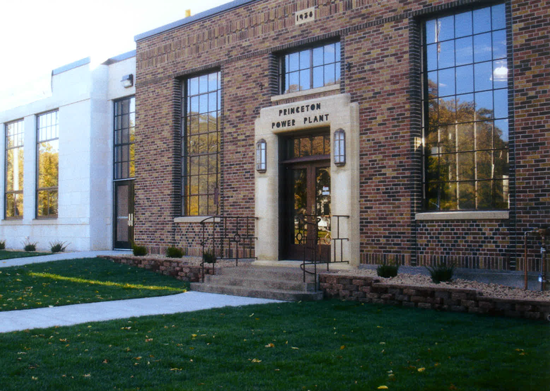 In 1911 The Village of Princeton, Mille Lacs County created the Water, Light, Power and Building Commission, thus the Municipal Water and Electric Commission was created. Since its inception in 1911 the Water and Electric Systems have been under the control and direction of a three person Commission. The Commission is responsible for the electrical generation plant, electrical distribution system, the water production and water distribution system. Today it is known as Princeton Public Utilities Commission. (PPUC) 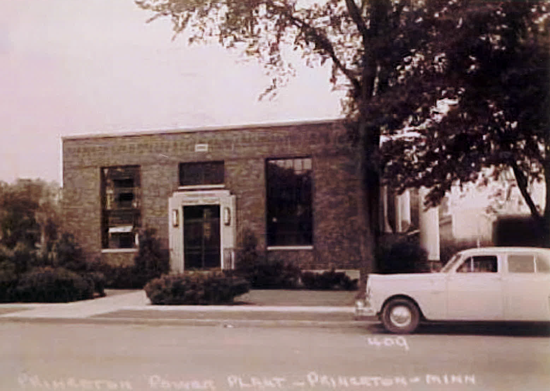 In 1966, the Fairbanks Morse seven cylinder generator was removed. In its place, a straight eight cylinder 1200 KW Enterprise was installed in 1967. In 1977, the four cylinder Fairbanks Morse was replaced by a Fairbanks Morse OP 12 cylinder 2400 KW. In 2002, a 16 cylinder Caterpillar 4840 KW filled the last empty bay. This generator went online in 2003. At the same time the two original 3 cylinder 150 KW Fairbanks Morse generators were taken out of service. From the 1970’s until 2003 these two generators were used only for station power, when power was lost. The computerized Caterpillar generator will automatically start and pick up station power and two designated feeders if the main line to the sub-station is lost. In 2006 a final addition squared off the building. A 5 KVA and a 15 KVA switch gear were added in this space. Modern office space with five work stations was a part of this project. The generation plant’s five current engines serve as peaking/emergency generation and have a 12,190 kW capacity which is adequate to meet the electrical demands of the utility service area.

Princeton’s electrical system is fed by two 69,000 volt transmission lines. Electricity is distributed through three substations. The utility operates approximately 30 miles of primary distribution lines and distribution energy at 4,160 and 12470/7,200 volts. Due to a long-established policy of scheduled maintenance and annually rebuilding obsolete sections, the distribution lines and components are generally in good condition.

In 1984 PPUC joined the Southern Minnesota Municipal Power Agency (SMMPA), a municipal corporation created by its members as a joint-action agency in 1977. SMMPA generates and sells reliable wholesale electricity to its eighteen municipally-owned utilities. The Agency’s main source of electricity is its 41% share of the 884 MW Sherco 3 coal-fired generator near Becker, MN.

PPUC also operates the water system with in the community. The Princeton Water Supply System consists of four glacial drift aquifer wells located throughout the community. The Municipal wells have a combined pumping capacity of 2,650 gallons per minute. The Utility has three storage facilities: one at 300,000 gallon capacity and two at 250,000 gallon capacity for a total storage capacity of 800,000 gallons. One tower is located in the northern section of the City, one in the central section, and one in the southern section. The tower in the southern section was refurbished in the summer of 2013. The Utility owns and operates two treatment facilities. The first one built in 1999 has a pumping capacity of 1,000,000 gallons per day and the second one built in 2006 has a pumping capacity of 2,000,000 gallons per day. The existing system consists of six inch and larger distribution mains. Most areas of the system have good pressure and the utility continues to upgrade areas that have adequate pressure. Princeton Public Utility Commission has a Comprehensive Water System Plan and an Updated/ Approved Wellhead Protection Plan.